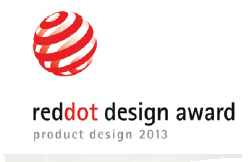 E.C.A. - SEREL booth was visited by the Ambassador of Rome Mr. Hakkı Akil and his wife Mrs. İnci Akil. Ambassador of Rome Mr. Hakkı expressed his emotions on the Elginkan Community as follows: 'E.C.A. brand is the brand of my childhood.  E.C.A. brand, which we believe and whose quality we trust, has been able to protect its corporate identity with caution. We wholeheartedly believe that it will protect this trust in future'. CERSAIE Fair, which is the biggest international ceramic and bath accessories fair of the world, brought global professionals of the ceramic sector together in city of Bologna in Italy.  Our Community, which participated in the meeting with E.C.A. - SEREL products, draw a great deal of attention with its product range and specially designed booth.

E.C.A. - SEREL participated with building products in CERSAIE 2013, which is characterized as the biggest fair of the ceramic   sector.

Having participated for the first time in the CERSAIE Fair, which is organized every year in Bologna in Italy, and which took place this year between 23rd - 27th September, found the opportunity to exhibit E.C.A. branded armatures and SEREL branded vitrified products during the event. Feeling the pulse of the world ceramic sector also this year as it does every year, CERSAIE Fair hosted representatives and professionals of the sector.

Almost 1000 companies from 40 countries approximately joined the fair which was organized in Bologna Exhibition Centre having an exhibition area of 176.000 square meters.  The fair, in which more than 600 Italian companies and more than 300 participators from other countries exhibited their products, reached over 75.000 visitors during they days it was open.  Majority of the visitors was composed by contractors, wholesalers, consultants, public officials and final users and architects in particular.

E.C.A - SEREL booth drew a lot of attention in CERSAIE Fair. The 200 m2 booth, which was composed of special design construction with three sides open, bedazzled. Having managed to step forward among many booths in the fair with its product range, E.C.A. - SEREL booth was visited by the Ambassador of Rome Mr. Hakkı Akil, his wife Mrs. İnci Akil and Milano Commercial Attaché Mrs. Semine Uygun.  In addition to Neva, Quadrille, Caro, Mina, Novita, Primemix and Photocell Products and Mixed Series from E.C.A. branded sink-bath armatures and shower heads; Amadis, DIAGONAL, MARINE, SAPHIRE, RITTA series from SEREL branded vitrified products,  E.C.A. Electra Series with a lot of awards and SEREL Amphora series with Red Dot Award, the most prestigious design award of the world, became the centre of attention of visitors.